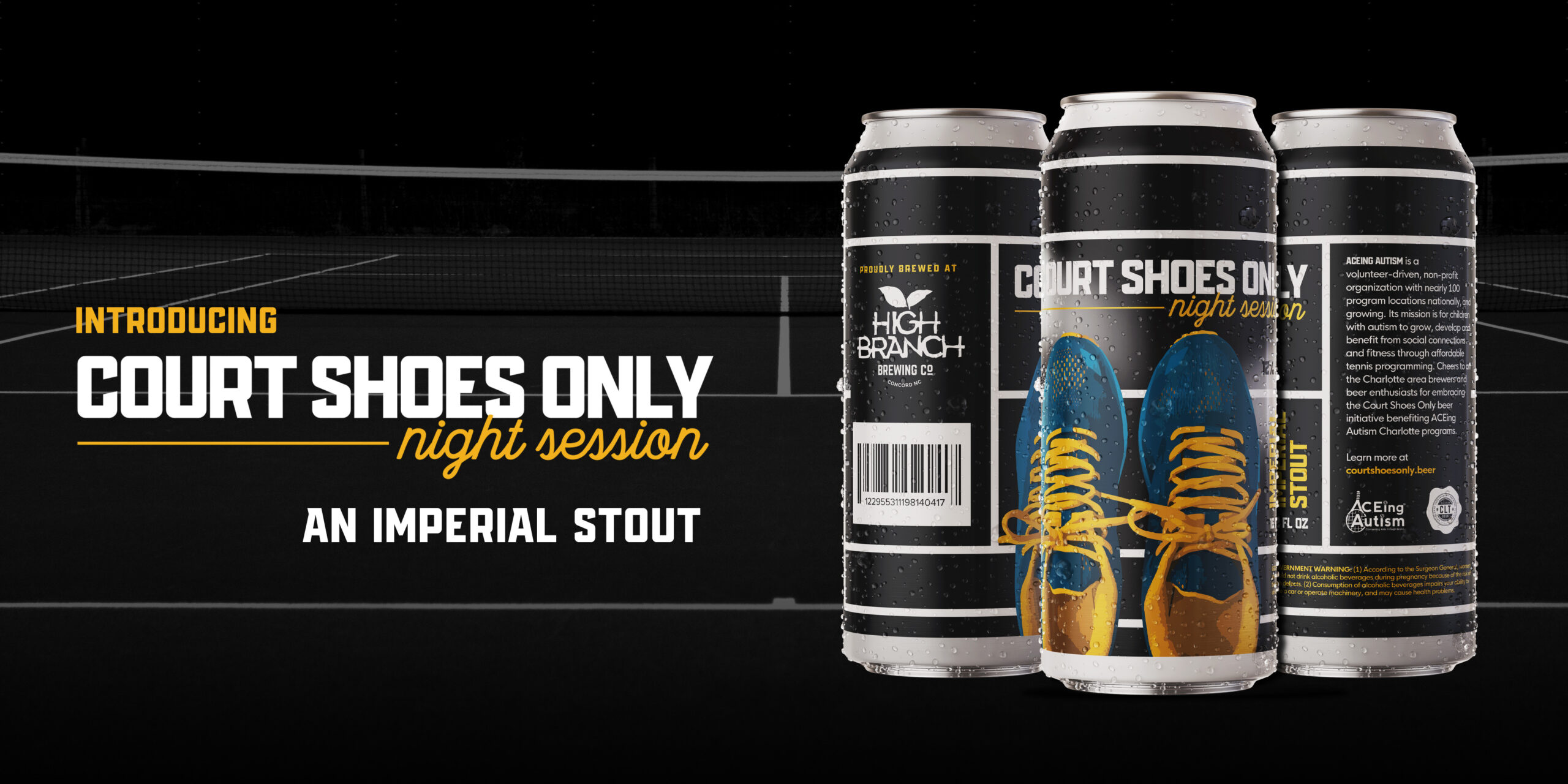 Simply put, you are remarkable. Your enthusiasm, attentiveness and thirst for locally crafted beer is the reason why Court Shoes Only is returning this year. Your resounding support of CLT’s breweries is also why we’re blessed to have a beer scene whose quality, variety and hospitality matches or betters anywhere in the U.S. And when it comes to seeking a beer that positively impacts children and families in our community through local ACEing Autism programs, there is no mistaking who does it best: YOU!

Introducing Court Shoes Only Night Session. Built from a collaboration between two of the city’s most highly regarded brewers, this year’s base recipe is an imperial stout; a style that provides generous freedom for breweries from across the city to express their personality and creativity within their variant.

Like the first Court Shoes Only, brewers are free to deviate from the base recipe with adjuncts, additions and even style variations to their heart’s content. We’re asking only that the beer’s color is dark to match the “night session” tennis theme. Brewery contributions from sales of Court Shoes Only, which totaled over $23K in 2021, will again benefit the ACEing Autism program locations in the Charlotte area serving South and metro Charlotte, University and Lake Norman.

This year’s Court Shoes Only beer release date of April 2 is significant because it is also World Autism Awareness Day; an important date for increasing understanding and acceptance of individuals with autism across the globe.

A great beer starts with a great recipe. Let’s get to know the brewers behind the beer!

Ben Dolphens, head brewer and co-owner of Divine Barrel Brewing, was a natural selection to collaborate on the new Court Shoes Only beer recipe. A longtime homebrewer and member of the Carolina BrewMasters homebrew club, Ben has over 20 years of brewing experience and approaches his craft with a “willingness to explore the limits of what beer can be, while also striking a balance in preserving tradition.” As you can see, Ben (pre-beard), already had a strong appreciation for dark beer.

Ben tapped TJ Creighton, head brewer and co-owner of High Branch Brewing as co-creator for the new Court Shoes Only beer recipe. High Branch’s Bossman, an imperial stout with chocolate, peanut butter, marshmallow and vanilla won Best of Show at QCBF 2020. What’s more, Ben and TJ collaborated once before on a pale lager so now we’ll get to see and taste how they interpret their own recipe on the other end of the beer spectrum.

More details to come including the return of a collectible glass from official glassware sponsor, Deacon Foodservice, a formal Court Shoes Only Challenge from our friends at Hopp and a surprise treat we can’t wait to lob into your basket.

In the meantime, be sure to note April 2 for this year’s Court Shoes Only release date and keep up with the latest brewery additions, beer details and other announcements on dedicated website, courtshoesonly.beer.

Also, NEW this year will be the launch of Court Shoes Only beers in the other communities in North Carolina where ACEing Autism has a program location: Asheville, the Triad and Triangle. We trust you’ll enjoy Court Shoes Only outside of Charlotte too!

Our thanks to all who sought out Court Shoes Only beers around town early last year. With your support, we are able to deliver ACEing Autism sessions to more families with greater impact, quality and consistency. We’re growing quickly and that’s in large part to YOU! Thank you again and let’s keep getting wins in the taproom, at the shops and on the courts.